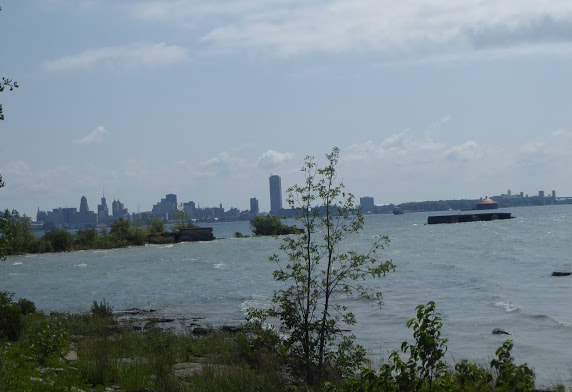 Located along the shoreline of the eastern end of Lake Erie, this historic area has been used by humans for  thousands of years. Indigenous people used this area right through the times of European exploration.  For centuries and generations the shoreline was lush with marsh, scrub, and dune habitat. A deep forest of cottonwood and oaks reached inland.  Wildlife here included fish, turtles, bears, wolves, and snakes. Birds that nested here, or traveled through on epic migrations, had hemispheric ranges.  Birds came from the northwest coasts of Alaska and the Aleutians, from the Arctic, and reached  to the Amazon and beyond.  The good news is that many of our present species still do!

In 1764 the British constructed a Palisaded fort near the shoreline, and adjacent to present day site of Waverly Woods.  Shoreline scrub and the nearby woodland were cleared.  By 1802 the harshness of the location forced a move for the fort. A newer fort was built nearby on higher ground.  This area was the location of critical battles and encampments  affiliated with the War of 1812. Those historic times  changed the nature and future of North America including the borderlands that were located along the Niagara River Corridor.

Gradually as two new nations grew to maturity, the area around Waverly Woods, sometimes called Waverly Beach, continued to be a place that attracted both people and wildlife, especially birds.

It was a perfect nesting area for an abundance of shorebirds. Birds migrated through and or nested in the returning scrubs.  Bald Eagles and Passenger Pigeons and as many as 350 other species of birds could be found here.

New settlers used the area for recreation, fishing, and farming. During the  19th Century speculators were purchasing lots.  A larger tract just adjacent to the Military Reserve was set aside as a grove for public enjoyment. By the last half of the Century amusements including a beachside merry go round was set up. It became a very popular lakeside picnic grove. Passenger boats traveled between Waverly and Buffalo on a regular basis. A large dock was built, the remains  of which can still be seen. Business and the amusement park grew. A Casino, hotel, and sports fields made Erie Beach a destination. The largest outdoor swimming pool in the world was built along the shoreline. It's  remnants can still be seen.today.

In 1905, African Americans championing and leading a burgeoning Civil Rights movement were trying to meet in Buffalo.  But they felt unsafe there and decided to move the meeting to the Erie Beach Motel. there was born the Niagara Movement, named for the falls half way down the Niagara River corridor. that movment led eventually to the NAACP and the long civil rights battles that people of color and others continue to fight.

Erie Beach closed its doors in 1930. Since then birders, scientists, and nature lovers have continued to learn from Waverly Woods.
​

Today Waverly Woods  is threatened by inappropriate development.  The wooded shorelines and natural areas have shrunk considerably just during the past decade. A new threat is on a ticking calendar  to develop the remaining woodlands and shoreline. This has energized a group of citizens of two countries to try and resist the development and protect this special historic and natural place.
Community Voices of Fort Erie
Citizens Group leading the effort to Protect Waverly Woods and Erie Beach